History wasn’t particularly kind to Tony Di Bart. The singing dentist – or wait, wasn’t that Dr. Alban? He had his moment in the limelight a quarter of a century ago, as his number one hit The Real Thing was released 25 years ago this week.

Antonio Carmine Di Bartolomeo, for that was his real name, wasn’t a dentist, actually, he was selling bathrooms in Buckinghamshire. In spite of the name, he’s actually British. His short-lived musical career started with The Real Thing, originally released on 12″ in 1993 including the original mix and two low-budget remixes by Rhyme Time, and was a minor chart hit.

But then, in mid-1994, the Joy Brothers turned up and remixed The Real Thing, turning it into a fantastic piece of mid-1990s pop-dance. “If I can’t have you, I don’t want nobody baby,” sings Di Bart. Grammatically incorrect, but it’s a great catchy pop lyric, and he has a great voice – it works extremely well with the dance backing. It’s also aged pretty well, surprisingly.

It hit number one, and was a sizeable hit around Europe, but the singles that followed over the next three years performed progressively less well each time they appeared. There was, ultimately, just one idea here – a great song with an interesting dance mix – and while the Joy Brothers turned up for a second go-around on the near-top-twenty hit Do It, the big names who turned up to rework the other tracks failed to make the same impact.

After the Joy Brothers‘ version, New 7″ Dance, we’re treated to the New 7″ Radio, a bluesy version full of funky guitar work and stings. It’s not unpleasant, but honestly it doesn’t work nearly as well as the dance version, where they have stripped out all the warbling and stuck to the song.

The funny thing about Joy Brothers is that they never really seem to have done much else. Richard Lane had had some minor success as a house musician in the early nineties, but has little of note to his CV, apart from this. So this is really a one-hit wonder on many levels. The full Joy Brothers version comes next, and really is a joy to hear. Where the radio mix had been tight, while working well, this version is huge and spacious.

The pleasantly tribal house mix by Rhyme Time follows, interestingly sharing elements from Joy Brothers‘ later version, suggesting that theirs was in fact a remix of a remix. This is, I suppose, the remix that got people’s attention initially, and so maybe goes some of the way towards explaining what went wrong next – it seems he needed a strong production team around him, and for whatever reason, album Falling for You, which finally appeared two years later, failed to include the right people. Indeed, his self-produced album included a second disc with five uncredited remixes, and that’s surely the only thing most people would have been interested in?

Finally on the single comes the original Underground Mix by Rhyme Time, now renamed as 12″ Dub Mix. It’s a bouncy house dub mix, but it doesn’t really offer much of interest. With its broad organ pad middle section, it’s difficult to imagine many DJs playing it even, but who knows? That dub closed the single, and pretty much closed Tony Di Bart‘s career.

Back to bathroom sales it is, then. But it’s a shame – Di Bart showed a lot of promise with The Real Thing, and it definitely deserved its success. It’s just a pity that he was never really able to capitalise on it, and it’s disappointing that the world no longer really remembers Tony Di Bart.

Fortunately, common sense has prevailed, and The Real Thing is still available to stream or download from all major retailers, alongside another random single from 1999.

Tony di Bart may have only managed a short career thanks to a couple of rather good remixes, but it was good while it lasted. Number 1 in 1994, this is the brilliant The Real Thing:

Unfortunately the webcam wasn’t working this week, leaving us with very little documentary evidence of the show. Artist of the week was my long-time favourite act The Beloved, and other highlights included oddities from White Town and The Postal Service.

Broadcast on LSR FM, online only. Artist of the week: The Beloved.

Universities, seats of learning though they may be, are not always seats of perfection, so a note from your producer saying “Please mention karioky,” as shown on the image below, shouldn’t be too much of a surprise! Just in case I forgot to mention it on Bay Radio back in 2000, there’s karioky at PJM on Wednesday night at 8pm. 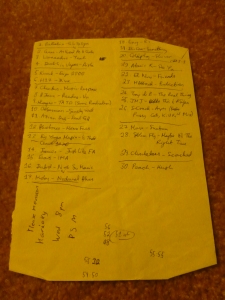 Notes: Reasonable… had severe ups and downs (I went from being half decent to completely dying on my rump). Nonetheless, entertaining from where I was sitting.

The end of January 2000 saw this blog’s predecessor, the radio show Music for the Masses, return for another run of shows on Bay Radio, Aberystwyth’s student radio station.

Notes: Mmm, nice. Err… not a lot else to say really. Lots of noisy listeners too, which is scary. But there we go. Oh, and hilarious drying up to even more hilarious consequences at one point. Well, I thought it was funny…