Last week, we heard a song about The Size of a Cow, so this week, we’ll go with Roni Size. This is Bite the Bullet.

Here are the top ten singles from a decade ago this week:

Hopefully you’ll excuse the interruption of normal service, because I stumbled across this in my archives and wanted to share it! Long before this blog existed, there was a student radio show called Music for the Masses, and the first ever show took place fifteen years ago today, on Aberystywth’s brand new student radio station, Bay Radio. The gaps in the playlist are the bits where I talked. 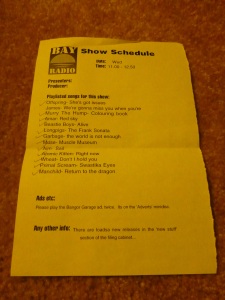 Notes: A reasonable flow to the tracks, considering the complete lack of planning. A slight surplus of playlist tracks at the end meant that I over-ran by about 2 minutes. Odd selection of music I suppose, but given the limitations, this is unsurprising. Better luck next time!

Last year, we looked at the nominees of the Barclaycard Mercury Music Prize in excruciating detail (you can find the links below). This year, let’s just take a very quick browse through the list of winners!

Which does make for a slightly odd list when you see it all together – it’s a mix of legends and total drivel… but who are we to judge? That’s the job of the judging committee.

I recently found this document in my archives, dated November 2003…

An amazing debut for Rhys Fulber’s solo project (he’s more commonly known as half of Delerium), which is taken to new heights by remixes from Tiësto and Ian van Dahl. This is how dance should sound in the twenty-first century.

Although not quite as instantly catchy as its predecessor, this single boasts some fantastic electroclash and retro remixes from the likes of JXL and Pete Lorimer.

Another great track from the fantastic eponymous debut album, including live acoustic tracks and deep and dark remixes, showcasing all the different sides of the band.

I bought this because I’d heard a few tracks by the band (who are, rather confusingly, the same people behind Delerium) and knew their reputation, and was totally blown away by this release. Dark and powerful industrial electronica.

One of the best tracks from the Depeche Mode frontman’s debut solo album, including remixes from Ladytron and Gabriel & Dresden and exclusive tracks across the different formats.

A slightly odd track that sounds something like a cross between the Human League and Dirty Vegas, but essential nonetheless.

Fantastic comeback from Goldfrapp including an exclusive track and remixes, and welcoming them into the electroclash arena.

Huge airplay propelled this querky but endearing track towards the right end of the charts. Unfortunately the single is fairly sparse, but it’s worth getting for the main track if nothing else. And of course it’s got beautiful packaging.

Worth buying not for the track itself but for the fantastic Pet Shop Boys remixes on the second CD, which introduce beautiful rippling retro analogue synths and prove that the lads have still got it.

Fantastic remix for the second single from the debut solo album from half of Kings of Convenience that frankly ought to have been a huge hit.

A new Pet Shop Boys release is always a treat — this one is no exception, backed with new b-sides and remixes from the bonkers Lemon Jelly and someone called Eric Prydz.

Another single from the essential album Melody A.M, this time with a daft remix by Roni Size but also an excellent new track and, on the second CD, the video to their best track yet, Remind Me.

A slight departure from their normal sound, but nonetheless one of the best tracks from their 2002 album Finisterre backed with remixes and dozens of exclusive b-sides.

Sometimes bands slip in and out of fashion by moving ahead of the times. Yello, on the whole, have slipped out of the public eye by doing much the same thing (on the whole) for the last decade. Finally, the rest of the world has caught up with them, so their fantastic brand of electro is finally contemporary once again. There are even Tomcraft mixes of their biggest hit to boot.

It’s another video of a picture I’m afraid, but Roni Size is back this week with a new album called Take Kontrol. This single, Bite the Bullet, available to download for free from the page with the video on it (if you can get through the security system, anyway) is rather brilliant:

We’ll look at this year’s ceremony next week, but for now here’s a continuation of the list that we started last week, of all the winners to date, by award:

Although seemingly now discontinued, these were a couple of Q’s better awards, recognising the contributions of the people behind the music.

One thing the Q Awards do pretty well is having lots of almost identically-named awards. They do show a pretty good track record with the newcomer and breakthrough artists though…

One of the jewels in the Q Awards’s crown:

The oddly named ‘Best Act in the World Today’ Award goes right back to the Q Awards’ beginnings in 1990, but was also recently joined by special solo awards too…

Best Act in the World Today

Perhaps the most fascinating of all the awards, except for the couple of years when it was given to really dull and non-innovative artists.

I suspect that, like me, you’re totally taken aback by this slew of near-identical awards. But hats off to them for finding a hundred different ways to honour U2 and R.E.M.!

Winner: Various Artists for The Songs of Jimmie Rodgers

BEST ACT IN THE WORLD TODAY

November 1998 saw the ninth Q Awards ceremony. Here’s a picture of Debbie Harry after, and here she is before, wearing some razor blades. Here she is again, looking less surprised, and here she is with her friends.

BEST ACT IN THE WORLD TODAY

After 1998, you can find pretty good coverage on Wikipedia’s Q Awards page. Next week we’ll summarise the winners to date…

By the mid-1990s, the Mercury Prize was firmly placed as a reliable guide to the albums worth hearing of that year. Certainly there were omissions – indie always seemed to be overrated, while the pop and R&B inclusions were a little unpredictable, but there are still a huge number of great albums in the lists below.

Winner: Portishead. Noel Gallagher famously thought he should have won for Definitely Maybe, but he turned out to be wrong.

Winner: Pulp. Presented to Jarvis Cocker, who then immediately handed over the award to Brian Eno and Tony Crean for the Help project.

Took place on 28th August 1997, at the Grosvenor House Hotel in London.

Here are your live highlights in the next month or two:

With dates coming up in the USA, the UK, and eventually France over the next few months, it must be fascinating to see them live.

The experimental Icelandic group are taking in the Netherlands, Germany, the Czech Republic, Austria, Iceland, and the UK over the next few months.

Straight out of 1989, but with a whole slew of albums behind them, some of which are really rather good too. Over the next few months you can catch them at festivals and supporting the Happy Mondays around the UK.

Depeche Mode-imitators or not, they’ve been responsible for some pretty excellent tracks. Catch them live across Germany through the Autumn.

It would be fascinating to know what to expect from Roni Size live, so if you can, head to see him across the USA through October and November.

Music for stowaways
Create a free website or blog at WordPress.com.