By 2012, the NME Awards were positively contemporary. Let’s take a look at the awards through to 2014.

Below is the full list of nominations for the event, which will be held at the O2 Academy Brixton on February 29.

I’m never quite sure how I should feel about new releases from Phoenix, but at times they have been extremely good, and this doesn’t sound too bad at all. From the new album Ti Amo, this is the title track:

The random jukebox selects things entirely beyond my control, and this week it chose Phoenix, with the rather nice If I Ever Feel Better…

Apart from the legendary demo tape (more next time), this was the last of the original run of shows, broadcast on Bay Radio, Aberystwyth’s student radio station. It closed with Erasure‘s lovely Piano Song.

Producer: Me. Waha! I shall take over the world!

Notes: Not a bad last show (well, for the time being). Pity my co-host never turned up, but there we go. The aim was to get in all my favourites from the last year or so, which I think I managed. Et fin!

For my penultimate show on Bay Radio, I managed to recruit my very good friend Tom to come along and co-host. Which made for a much more varied show all round. 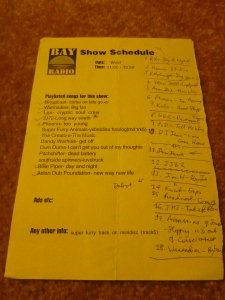 Notes: Yeah, I really enjoyed it this week – it’s definitely much more fun with a co-host… (even if you do have to relent & play Simon & Garfunkel and Jimi Hendrix…)

One of the perils of the early days of Bay Radio was that it involved presenting from the DJ booth in the Aberystwyth student union. This meant that there was a fair chance that at some point your equipment might be suddenly removed for one reason or another… 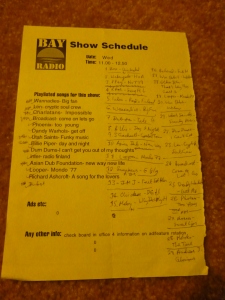 Notes: Ooh crumbs, well I’m not one to moan. Well, not too much… but having your levels played with, the lights played with, your entire CD player equipment removed (yes, you guessed it, I didn’t actually choose to play Elton John. Or Looper a second time – especially given how much the latter resembles a pair of new born pants. Well, the former too actually, if it comes to that)…

From Kings of Convenience to The Whitest Boy Alive to his own solo work, with vocals for Röyksopp and many others, Erlend Øye is a very busy man indeed. The year after his brilliant solo album Unrest, he released a mix compilation which is quite unlike any other, one which deserves the right to be regarded as an album in its own right.

Erlend Øye‘s DJ-Kicks compilation kicks off with the warm crackle of vinyl and the sound of Jürgen Paape‘s So Weit Wie Noch Nie, a lovely gentle piece of electronic music with a touch of acoustic guitar and a vocal from way back when. The first signs of anything being amiss come at the end, as Øye mixes in the backing from his own Sheltered Life with an acapella version of It’s a Fine Day. Clearly his DJ style is eccentric to say the least.

This mixes into the Kings of Convenience remix of Cornelius‘s Drop, which sounds entirely like a Kings of Convenience track but sung in foreign, with its rhythmic acoustic guitars and gentle vocals. It’s got some extra beats and water noises too, but it’s altogether fantastic.

Next is the brilliant If I Ever Feel Better by Phoenix, mixed ingeniously by a vocal from Øye. I don’t often talk about Phoenix, because I’m never quite sure whether I actually like them, but this track is great. We then take a side step via Jolly Music‘s Radio Jolly mixed into Øye’s own Prego Amore, and then the quite incredible Rubicon by Alan Braxe and Fred Falke.

You might find it difficult to know what to make of Avenue D‘s 2D2F. I can’t help but think it’s brilliant, but it is just a touch on the vulgar side. Maybe you just need to make your own mind up on this one.

With a duration of little more than fifty minutes, the tracks come thick and fast, with The Rapture‘s brilliant I Need Your Love mixing via Lattialla Taas by Uusi Fantasia with a new rendition of Venus as its vocal into Justus Köhncke‘s 2 After 909, and finally Erlend Øye‘s then new single The Black Keys Work. If at any point you feel the need to breathe, you’ll just have to press pause for yourself.

With the dark backing of something from the early 1990s, Jackmate‘s Airraid turns up, sounding totally brilliant, and taking the album into slightly deeper house territory. Then Silicone Soul‘s remix of Poor Leno by Röyksopp meets There is a Light That Never Goes Out for an odd, if compelling soundclash.

The last few tracks steadily bring the tempo back down – Skateboard‘s Metal Chix (augmented with a vocal of Always on My Mind) is full of flanged synths and driving beats, but it mixes into Villalobos‘s extremely chilled (and largely backwards) Dexter, which in turn leads into Minizza‘s inventive pop sound with their version of Winning a Battle, Losing the War.

Finally, the mix comes to a close with Morgan Geist‘s Lullaby, now with another added vocal from Erlend Øye, this time singing A Place in My Heart. It’s much more laid back than some of its predecessors, but like every live performance it leaves you slightly with the feeling that the night will last forever. Quite exceptional.

This edition of DJ-Kicks seems to have become somewhat difficult to find, but there are still copies floating around second hand, such as from here.

Five of the best live acts who you might want to catch in the near future:

Touring across France and Belgium starting tomorrow and running through till mid-April, and then with more dates at the end of the year.

Their tour continues tonight in Fürth, Germany, followed by more German dates, then Italy, Switzerland, the Czech Republic, Poland, Croatia, Macedonia, and currently ending in the Netherlands in June.

With festivals coming up in early March in Australia, followed by live dates in the US and Canada, and then the UK and Ireland in April.

Straight out of the 1990s, with dates in Manchester, London, Leamington Spa (yes, really) and Amsterdam throughout March.

You’ll find them in Australia over the next few weeks, before heading to Chile, Argentina, Brazil, Spain, Sweden, Colorado, and Mexico over the summer.

The track which they chose to launch the album is called Entertainment, and admittedly it does sound a little bit like Kung Fu Fighting in places, but I’m not sure that’s entirely a bad thing. Here it is: