Last week, we ran through the 63-year history of the Ivor Novello Awards, and listed all the winners in the Song and Album categories, and the special and one-off awards. Let’s finish that journey now, starting with the Artist Award categories.

Songwriter of the Year

Best Middle of the Road Song

The Best Song From a Musical

Best Theme from a Commercial

Let’s take a final look at the history of the Ivor Novello Awards, by trying to summarise the winners by award category. As they should, these have evolved somewhat over the years, and many have changed their name, so I’ve tried to reconcile them into a single category if they’re roughly the same. I’ve generally tried to use the most recent name in each instance.

PRS for Music Most Performed Work

Those with an asterisk (*) were awarded jointly as Most Performed Work and Best Selling British Song, as a single award.

Those with an asterisk (*) were awarded jointly as Most Performed Work and Best Selling British Song, as a single award.

International Hit of the Year

In the second and final part next week, we’ll look at the Artist, Genre or Style-Specific Awards, and awards for Musicals, Films, Television, Radio, and Video Games.

The 1994 ceremony took place at Grosvenor House on 25th May.

Forty years into its history, the 1995 ceremony took place at Grosvenor House on 23rd May.

Grosvenor House in London hosted the Ivor Novello Awards on 30th May 1996.

London’s Grosvenor House hosted the 1997 ceremony on 19th May.

The 1999 Ivor Novello Awards were presented on 27th May 1999 at Grosvenor House, London.

After drifting off the rails somewhat in the 1970s, the Ivor Novello Awards started to go back to being about songwriting in the 1980s. Although they still seemed a little more obsessed with Bucks Fizz and Cliff Richard than is really healthy.

The 1989 Ivor Novello Awards were held on 4th April at Grosvenor House, London.

Having discovered popular music in the mid-1960s, the Ivor Novello Awards seem to have taken a bit of a step back in the 1970s, by becoming obsessed with musicals and jazz, and ignoring the stuff that people were actually listening to.

Fifteen ceremonies in, the Ivor Novello Awards entered the 1970s on 10th May 1970, at Talk of the Town. The ceremony was broadcast on TVR.

The 1971 ceremony was the sixteenth.

On 3rd May 1973, at the Connaught Rooms in London, the Music Publishers Association Lunch hosted the eighteenth Ivor Novello Awards.

BBC Radio 2 broadcast the 1974 ceremony on 17th May, introduced by Alan Black.

The 1975 ceremony took place at the Dorchester Hotel, London and was broadcast on BBC Radio 2 on 22nd May 1975. The awards were introduced by Len Jackson.

The 1976 ceremony too place on 11th May at the Dorchester Hotel, London.

The 1977 ceremony took place at Grosvenor House, in London.

The 1978 ceremony took place at Grosvenor House, in London.

The 1979 ceremony took place at Grosvenor House, in London.

If you’ve been paying attention, you’ll know that we’ve spent the last few weeks working through the history of the NME Polls, from 1952 to 1992. It’s a long and complicated history, and one that pretty much encapsulates the first forty years of modern popular music in the UK. So as a side-step, it’s worth taking a couple of posts to look at them, award by award.

With such a complex history, it’s hard to trace the winners of a particular category through time, so I’ve taken a few liberties here. Essentially anything that seems to be roughly the same category has been treated as the same thing. Also, for the year ranges, there are a few missing years here and there, so for instance 1967-1970 could mean anything between 2 and 3 wins, but it definitely isn’t 4, as we have no information for the poll results from 1969, or even any meaningful confirmation that the poll took place.

Here are all the winners for specific singles, videos, and albums, including the wonderful “Best Dressed Album” (later “Best Dressed Sleeve”) award.

The group of media awards, for radio, TV, films, and venues, are particularly fascinating, since other award ceremonies rarely have anything like this.

In later years, the poll included some odd nominations for people, often outside of the world of music, which provide an interesting window on the past.

Most Wonderful Human Being

These are some of the oddest categories – I’m honestly not sure what the “Hype of the Year” category was all about, but it is interesting to see just what was catching people’s eyes at the time.

Event of the Year

Bad News of the Year

Hype of the Year

That concludes part one of the summary of NME Poll Winners. Next week, we’ll look at the artist categories.

In 1972, NME celebrated its twentieth birthday, with the same anniversary of its poll winners awards ceremony the following year. Their readership seems to have been fascinatingly obsessed with Cliff Richard and Elvis Presley during the first half of the decade, and then in 1976 seem to have been very dismissive of the early Sex Pistols, before falling very deeply in love with them the following year.

The NME website (and consequently Wikipedia, which definitely doesn’t include material copied from other websites) includes the 1971 results here by mistake, so I’ve tried to transcribe what I can read on the article scan. Apologies for the omissions:

Due to the public’s obsession with Elvis and Cliff not entirely matching the contents of the magazine, this was the last of the live shows until 1994.

There was no ceremony show from 1971 onwards, but there was still a poll, with the following winners:

Again, the NME website and Wikipedia have repeated the 1973 results here by mistake, but this time unfortunately there is no alternative source for the results.

Bay Radio spent its first couple of years broadcasting on a closed loop around the Aberystywth University student union, and my show was no exception. The main advantage of this was being able to raid the “Ents” (Entertainments) record collection and play actual vinyl from the early 1990s, which must have seemed a very long time ago… 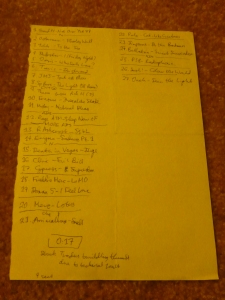 Notes: Mmmm, well, deliberate bloopers of the week include splitting up the first advert break due to thinking there were 2 less than there were and inadvertantly playing the last Sash? single – which featured Dr. All Bran on vocals. Ooops. Odd show, really, as I had twice as much music as I needed and also rather a lot more other material. D’oh! Still, better too little than too much. No, other way round…

This week’s movie soundtrack comes direct from 1984, while the original movie was released all the way back in 1926. As a huge fan of the original film, I’m not entirely sure how I feel about this album – on the one hand it’s the legendary Metropolis, with a soundtrack by the legendary Giorgio Moroder. On the other hand, it is pretty awful. But I haven’t actually seen this version of the film, so I can only really judge the soundtrack on its own merits.

First up is Freddie Mercury delivering a typically lively performance on Love Kills, which also sees Giorgio Moroder excelling himself with an enormous 1980s backing track. It doesn’t always quite seem to complement Mercury’s vocal, but by and large it works. Whether or not you think it’s any good will probably depend on how you feel about the performers, but however you look at it, this is a pretty strong opening track.

Next we get Pat Benatar to perform a pretty poor song called Here’s My Heart. Although written and mixed by Moroder, he doesn’t seem to have had much a say on this particular track unfortunately. Jon Anderson (of And Vangelis fame) turns up after that for the entirely competent Cage of Freedom, followed by Cycle V with Blood from a Stone.

Without having seen it, it’s difficult to even begin to imagine how this might have sounded as the actual accompaniment to the film. At times you wonder how it ever could have worked, but at others it’s rather more clear, such as the pleasant instrumental The Legend of Babel, which closes side A. But even in its better moments, it is, unfortunately, extremely dated. It might well be only thirty years since its release, but it sounds like considerably more.

Side B opens with Bonnie Tyler, whose heart seems to have recovered to the degree that she can deliver Here She Comes with some degree of flair. It doesn’t help hugely – it’s a pretty poor song, but she’s doing her best.

Slightly better, but still very much a 1980s power ballad is Destruction by Loverboy. You can almost see them making silly faces on Top of the Pops when you listen to this. Was it just that Moroder’s sound was so defining of the early eighties, or did he go out of his way to make this album sound as dated as possible? It’s difficult to be sure.

The later tracks don’t really help matters, as Billy Squier and Adam Ant do their level best with On Your Own and What’s Going On, but neither really achieves a huge amount unfortunately. Finally, Moroder turns up again for another instrumental, Machines, which this time proves just to be a bit of fairly aimless synth noodling.

I’ll watch it one day, but for all I know the Giorgio Moroder version of Metropolis may work extremely well. It is, however, difficult to see how this album might reach its sixtieth birthday and stand the test of time anywhere near as well as the film had when it was released in this form. Best avoided.

The 1999 reissue of Metropolis still seems to be available from major retailers, such as here. You can find the DVD of this version here.

On 12th February 1992, the venue shifted to the Hammersmith Odeon in London; Simon Bates once again presented the show via an out-of-body experience; and The KLF brought a dead sheep to the BRITs dinner venue.

Presented by Martika, live from her kitchen. Nominees:

Winners: Simply Red and The KLF

Voted for by the British Association of Record Dealers (BARD). Presented by Kim Wilde. Nominees:

Free vote; voted for by listeners of Dave Lee Travis and Simon Mayo on BBC Radio 1FM. Presented by Simon Mayo. Nominees as listed by the BRITs website:

Voted for by viewers of Going Live. Nominees:

Music for stowaways
Create a free website or blog at WordPress.com.