By March 2000, Bay Radio had existed as an actual thing for about a year, and it was going from strength to strength. They still hadn’t quite found the strength to get rid of me yet, but the shows were pretty good all round. 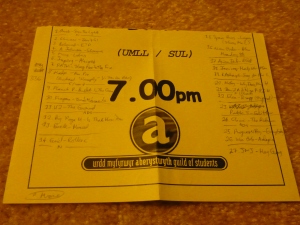 Notes: Excuse me while I blow my own trumpet, but what tunes!!! It definitely helps to know what the record library includes beforehand! Ooh, that’s better. Anyway, on the whole not too bad, including the return of ADVERTS!!! Thus I could roll around almost in hysterics while uncharismatic people rattled on about new launderettes opening soon to the tune of “Popcorn”. Never have I been so amused. Anyway… Oh yes, I also rather naughtily made use of ents’ record player to play some of their records on. “Half the Man” isn’t nearly the tune I remember it being. Also I had my first impartial feedback today, which was “You sound a bit like Simon Bates.” I’m still not sure whether that’s a good or bad thing, but so long as I don’t start sounding like Neale James. Mmmmmmmmmmmmmmmmmmmmmm, baby…

This site uses Akismet to reduce spam. Learn how your comment data is processed.